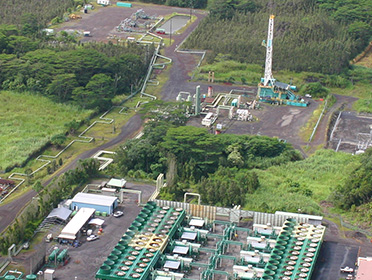 Geothermal energy comes from volcanic heat stored beneath the earth's surface. Underground reservoirs of water heated by volcanic activity can be tapped for steam to generate electricity. On Hawaii Island, Puna Geothermal Venture operates an advanced binary-cycle power plant. The heat from hot water in a heat exchanger generates vapor from a working fluid with a low-boiling point. This vapor drives a turbine to produce electricity. The water, which never comes in contact with the working fluid, is then injected back into the ground to reheat.