Wind is a Clean, Sustainable Source of Energy 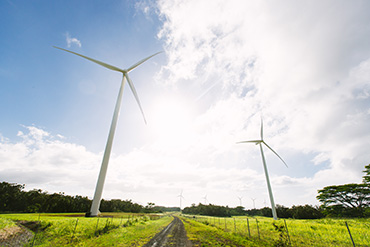 Human beings have used the wind to supply power for thousands of years, starting with sail boats to travel or fish and wind mills to grind grain or lift water. Today, harnessing the wind is also one of the cleanest, most sustainable ways to generate electricity.

Wind power produces no toxic emissions and none of the heat trapping emissions that contribute to global climate change. Wind energy is among the fastest growing sources of renewable energy in the world.

The motion of the wind is captured and converted to electricity by wind turbine generators. The rotation of the turbine blades turns a shaft connected to a generator that produces electricity. The blades are situated high atop towers to take advantage of stronger, less turbulent winds. Many wind turbines grouped together to generate bulk electrical power are called a wind farm.

A primary reason for the formation of Hawaiian Electric's parent company, HEI, in the early 1980s was to develop wind energy. HEI invested more than $25 million through a non-regulated subsidiary to develop a 9-MW wind farm at Kahuku. HEI invested another $7 million in a 3.2 MW wind turbine at the same location -- the 360-ft. MOD-5-B - which was then the world's largest horizontal axis wind turbine. The Kahuku wind farm experienced winds that were more turbulent than expected and mechanical problems with the first-generation turbines, resulting in low energy production. In addition, a dramatic drop in the price of oil made the wind farm too costly to operate. It was later sold to New World Power and has since been closed and the turbines dismantled, but the operations provided useful research information.

Wind ebbs and flows over the course of a day. The rapid changes in the wind can create challenges on small, remote electrical grids like those in Hawaii, causing electric frequency and voltage to fluctuate. Hawaiian Electric continues to work with outside experts on wind integration, "smoothing" and energy storage in order to maximize the use of wind power on our island grids.