The Ocean is a Vast, Largely Untapped Energy Resource

Oceans cover over 70% of the earth's surface. Oceans are the world's largest collector and retainer of the sun's vast energy. Ocean energy is continually renewed and available 24/7. The "fuel" of ocean energy is both free and clean. Just a small portion of the energy stored in the oceans could power the world.

With fossil fuels - particularly oil - running out and becoming increasingly expensive, ocean energy is becoming more competitive and attractive. The challenge is to convert this abundant source of energy into useable power for electricity and transportation.

For over 60 years, several forms of tapping energy from the ocean have been researched and implemented. Ocean energy has two forms:

Because Hawaii has a highly consistent wave energy resource, the Office of Naval Research is monitoring an experimental wave energy buoy off Kaneohe Marine Corps Base.

Hawaiian Electric has helped with the transmission connection to the electric grid.

The 40-kW experimental buoy, manufactured by Ocean Power Technologies, Inc. employs the bobbing motion of a buoy to drive an electrical generator.

Thermal energy conversion plants use the temperature difference to make steam from a quick boiling working liquid and pass the steam through a turbine generator to make electricity. Unlike electric generation from many other renewable energy technologies, which may vary with weather and time of day, an OTEC plant could produce electricity 24 hours/365 days a year. This capability also would make OTEC an attractive alternative to conventional base load power plants powered by fossil fuels.

Fresh water production is one potentially beneficial by-products of OTEC. The cold deep ocean water can be used for aqua-culture (fish farming) as it is pathogen free and nutrient rich, or air-conditioning and refrigeration in nearby buildings.

No commercial OTEC plant is in operation anywhere in the world. As OTEC extends from a land base, across the shoreline into the deep ocean, many different government agencies would be involved in permitting an OTEC plant and ensuring environmental impacts are monitored. 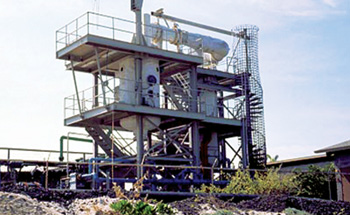 Hawaii has experimented with OTEC since the 1970s at the Natural Energy Laboratory of Hawaii (NELHA) on Hawaii Island. It was found to be technically feasible but prohibitively expensive in comparison to oil prices at that time. 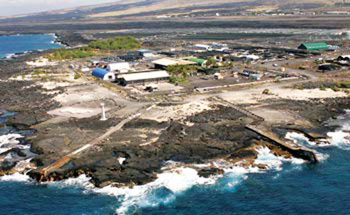 Hawaiian Electric is in negotiations for a power purchase agreement with an ocean thermal energy conversion company. A preliminary agreement has been reached for a unit off the southwest coast of Oahu near the utility's Kahe Power Plant. In addition, Lockheed Martin has expressed interest in developing a prototype unit in Hawaii.