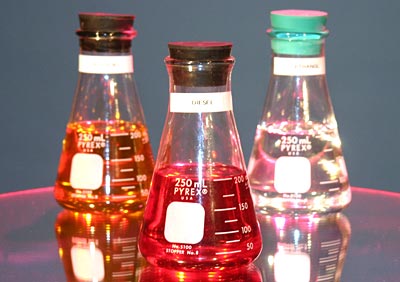 To reduce our dependence on imported oil, our community must make the most of all available local resources, including solar, wind, hydro, geothermal, ocean energy -- and biofuels.

Biofuel and biomass are general terms for renewable fuel created from organic matter, including wood and other plants, algae, or waste such as restaurant grease or animal fats. Fossil fuels, in contrast, are long dead organisms that have been under geological pressure deep underground for millions of years.

To generate electricity, biomass can be "direct burned" for heat to create steam or gasified to burn and create steam. Biomass may also be converted into liquid biofuels, such as biodiesel or biogas. Biofuel can be processed through various systems to create biodiesel which can be used interchangeably with or totally replace petroleum-based diesel.

Why Do Biofuels Make Sense for Hawaii?

Because we currently use mostly liquid fuels to generate electricity, Hawaii can make the switch to biofuels to make the most use of our existing power plants. Generation units that use natural gas can be modified to use biofuel as part of attaining Hawaii's 100 percent renewable goal.  Some benefits of biofuels:

Hawaiian Electric's preference is biofuel from locally-grown and processed crops. The goal is to encourage an agricultural energy industry in Hawaii to protect and green open space, revive agriculture for food and fuel, create jobs and keep more of Hawaii's energy dollars at home - in addition to reducing our use of imported fossil fuel. Until the local agricultural energy industry becomes more robust, it may be necessary to import biofuel.

In 2010, Hawaiian Electric completed and brought into service the Campbell Industrial Park Generating Station. It is believed to be the largest commercial generator fueled exclusively with sustainable biodiesel. The 120-MW, simple-cycle unit located in West Oahu consists of one combustion turbine generator and auxiliary systems.

With its rapid response capability, CIP Generating Station is an essential part of the Hawaiian Electric system, supplying needed reserves during peak demand periods and as needed at other times.

In 2011, Hawaiian Electric successfully used 100% renewable biofuel to fire a petroleum oil-fired steam turbine generator at Kahe Power Plant. It is believed to be the first time a utility-scale steam unit has fired on 100% biofuel at 100% capacity.

The successful test confirmed that biofuels - locally grown to the greatest extent possible - can be an important part of Hawaii's clean energy future.

The 90 MW Kahe #3 Biofuel Co-firing Demonstration Project was conducted in cooperation with the Electric Power Research Institute based in Palo Alto, California, to determine how much biofuel can be used to offset the use of fossil fuel oil in steam generating units.

Biodiesel has been used on Maui in Ma'alaea Power Plant - which relies primarily on petroleum diesel for fuel -- start up and shut down of generators. The biofuel originally obtained from Pacific Biodiesel to avoid opacity (visibility of emissions) problems which can lead to violations of air quality permits.

In 2011, sustainable biodiesel was tested in generators over a three-month period to determine if there were any adverse effects from long-term use of biodiesel. That test was successful indicating that biodiesel alone or in blends could be used in existing diesel-fired generators in Maui County, on Hawaii Island and on Oahu.