Within three years, the company's stockholders were urging extension of service to homes in Waikiki. Expansion demanded new generation, and in 1894 an Alakea power plant was dedicated and put in service in downtown Honolulu. That same year, the power line to Waikiki was completed across the swamps, rice fields and duck ponds.

By 1902, the first of Waikiki's many splendid hotels was completed. The construction of the Moana Hotel required a second power line across that swampy five-mile stretch from the Alakea plant.

By 1907 Hawaiian Electric Company's customer base had risen to 2,500 and the number of lights increased to 40,789. With demand threatening to exceed supply, Hawaiian Electric installed its first turbine generator.

By now, the public was beginning to realize that electricity had almost limitless potential....with a promise that went far beyond just lighting. The electric sewing machine, toaster, washing machine and vacuum cleaner were already on the market. That year Hawaiian Electric also entered the merchandising field, selling flatirons and "toaster stoves" from its main office.

The company continued to grow, extending its system to serve the people of Makiki, Kamehameha Schools, the University of Hawaii and Waialae Ranch.

In 1914, rural service to Kaneohe was made possible by running an 11,000-volt line through Nuuanu Valley and over the Koolau mountains. The lights finally went on in Windward Oahu just about the time housewives were welcoming development of the electric range and refrigerator.

In response to consumer needs, the company's transmission and distribution system expanded to the more remote areas of the island. By 1922, Hawaiian Electric had constructed lines to serve Wailupe and Kuliouou, Schofield and Pearl Harbor, Kahuku and Laie, Lualualei and Ewa. The following year, families in Kailua and Lanikai had electricity. 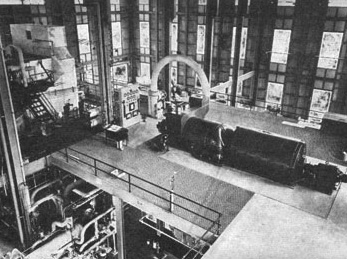 By 1924, the population of Honolulu exceeded 125,000 and the company reported selling 7,000 "cooking and heating" appliances. Load was also boosted when the Honolulu Rapid Transit Company discontinued generating its own power for the city's trolley cars and Hawaiian Electric took over this responsibility. In 1927, Hawaiian Electric's new King Street building opened for business.

In 1933, Hawaiian Electric begins construction on a new 11 kV line (with provision to change to 44 kV in five years) spanning seven miles through Kalihi Valley, over the Koolau range and down the Windward slope to the Koolau switching station.

By the mid-1930s, business was beginning to recover from the depression and the population and military facilities on Oahu grew tremendously.

Generating units at Hawaiian Electric's Alakea power plant were no longer sufficient to supply the growing demand for power, and in 1937 ground was broken for a second power plant at Waiau in west Oahu. It went online just 12 months later. At the same time, Hawaiian Electric began constructing a second power line to serve the growing Windward Oahu population. This time the line went through Kalihi Valley.