Leading the Way to a Clean Energy Future for Hawaii 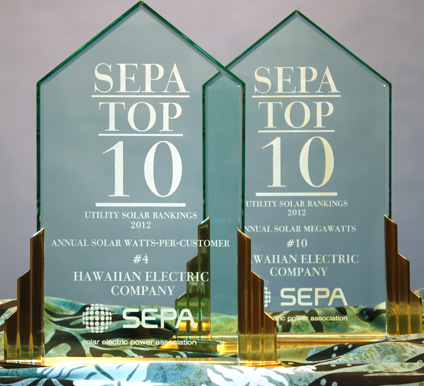 In 2012, Hawaiian Electric and Maui Electric Company are honored for Solar Energy Adoption by the Solar Electric Power Association.

Going Solar, an online solar resource center, was launched in 2012 to provide customers with information on choosing a contractor, financing, siting, and sizing photovoltaic and more. We also added a photovoltaic system at our 120 megawatt biofueled generation station at Campbell Industrial Park to help power the facility and run two electric vehicle chargers.

In 2013, Hawaiian Electric introduces a new logo, reflecting its deep roots in Hawaii and signaling a renewed commitment to customers.

In 2014, Hawaiian Electric deactivates the Honolulu Power Plant. The same year, we develop comprehensive clean energy transformation plans which include goals of increasing renewables to 65 percent, tripling distributed solar, and lowering customer bills 20 percent by 2030. By the end of the year, we installed smart meters at 5,000 Oahu homes as an initial phase for our planned smart grid project.

In 2015, Hawaiian Electric pledges support of the state's new goal of 100 percent renewable energy by 2045, the most aggressive clean energy goal in the country. To achieve our vision of clean energy future for our islands, we understand the importance of more renewable energy. Today, Hawaiian Electric and its subsidiaries provide electricity and services to 95 percent of the state's 1.4 million residents. Over 23 percent of the electricity used by our community at the end of 2015 came from renewable sources, up from 21.3 percent the previous year and 9.5 percent in 2010. 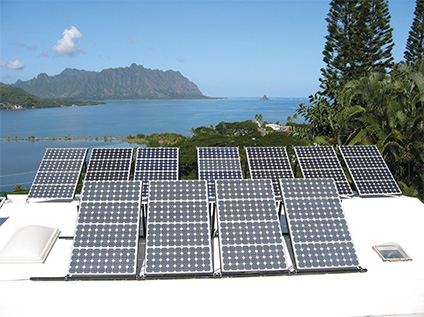 In 2016, we broke ground on a new biofuel-capable generating station at Schofield Barracks, strategically located away from the shoreline. By the end of the year, about 15 percent of all residential and commercial electric customers have PV systems – nearly 20 times the national average. 6,764 solar applications were approved this year alone.

At CS Week 2017 Hawaiian Electric is honored with the Expanding Excellence Award for Best Analytics Project in collaboration with Stem, Inc. and Ibis Networks. The project worked to provide 400 Hawaii public schools and businesses with tools to monitor electricity use and control costs while making the grid more efficient for all customers.

The Hawaiian Electric Companies maintain a consolidated 27 percent renewable portfolio standard in 2018, even with the loss of Hawaii Island’s geothermal resource for most of the year following the Kilauea volcanic eruption. Nearly 4,000 new private rooftop solar systems come online for a total of about 77,000 systems. One of every three single-family homes on Oahu has rooftop solar, the highest percentage in the U.S.

2018 saw Hawaiian Electric and the US Navy break ground on a 20-megawatt solar facility at the Joint Base Pearl Harbor-Hickam West Loch Annex. The project will save Hawaiian Electric customers at least $109 million over its expected 25-year lifespan, compared with the cost of using oil to generate electricity. It will also reduce the utility’s use of imported oil by 76,000 barrels annually.