Heroic efforts to keep the power on

It was December 7, 1941, and Manuel Lemes and his crew witnessed firsthand the attack on Pearl Harbor. "A plane crashed in the water right in front of the Waiau plant," Manney said. He and his crew remained at the plant during that terrifying morning.

"I didn't hear the first bomb but I saw the flash and the smoke and the clock on the wall said 7:53. I called the switchboard operator and told him we were under attack, and to keep the load down. I didn't want any smoke coming out of those chimneys, and the Japanese figuring we were another battleship."

The attack went on for 2½ hours. Manney and his plant crew at Waiau Power Plant stayed at their posts that fateful day and many days afterward.

"It was two months before I went back to my house," Manney continued. "We just lived at the plant and did what we had to do."

Manney's diary of those days is now a part of the book, The World War II Diary of Manuel Lemes.

Hawaiian Electric celebrates its 50th anniversary in 1941 during the advent of World War II in Hawaii. As Japanese war planes strafe the Waiau Power Plant at Pearl Harbor with machine gun fire, 13 workers stay at their posts to safely shut down the plant in 1941. The plant's log book records, "The plant is under attack - secured everything." Later, power plants are painted in camouflage and reinforced with steel and concrete.

After the surprise attack on Pearl Harbor on December 7, 1941, Honolulu was placed under a strict blackout and the government spent $300,000 to reinforce Hawaiian Electric Company's primary power plants against further air attacks.

Even the blackout didn't lessen the need for electric energy. On the contrary, with on-island U.S. troops working around the clock, the company built two 44,000-volt lines to service military bases. Hawaiian Electric power plants at Honolulu and Waiau furnished more than one million kilowatt hours of electricity each day at the height of the war effort. The wartime blackout was lifted in May 1944 and martial law ended that fall.

As Hawaiian Electric entered its sixth decade, the entire island of Oahu had been electrified and some 52,000 customers were on its books. In 1947, the Ward Avenue operations building was constructed. The following year ice and cold storage services were discontinued. In 1950, a total of 66 new subdivisions were developed. Hawaiian Electric's new 116,000-KW downtown Honolulu power plant became operational in 1954. 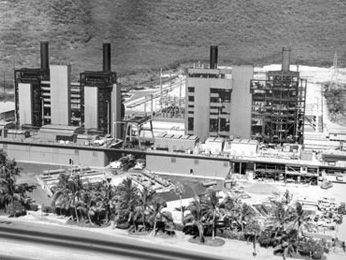 The granting of statehood in 1959 and the arrival of the first passenger jet transport made Hawaii one of the premier vacation destinations in the world. For the 50th State, it was to be a period of astounding economic growth. Over the next 10 years, Hawaiian Electric's plants and facilities increased by as much as they had during the entire history of the company.

A new multi-million dollar airport was built, and the University of Hawaii was expanded. Ala Moana Shopping Center -- first opened in 1959 -- completed a second phase in 1966 to become the largest shopping center in the country at the time. Tourism boomed, new hotels mushroomed and in 1967, Hawaii's visitor count topped the million mark. Highways and freeways were under construction -- and everything and everyone required electric power.

After seven years of research into population growth and residential and industrial expansion, Hawaiian Electric began building a new power plant at Kahe in west Oahu. In 1963, the state's first reheat steam turbine generator went on line at Kahe. Today, Kahe has six units with a total generating capacity of 650,000 KW.