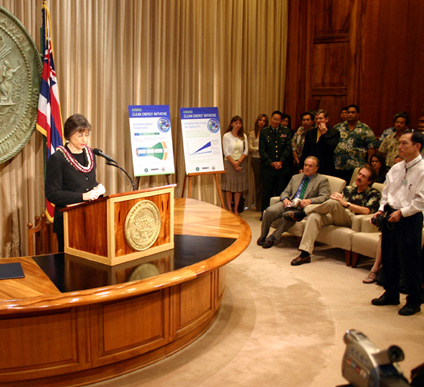 In 2006, Hawaiian Electric celebrated the 10th year anniversary of the Energy$olutions program with the installation of its 30,000th solar water heating system. The program paid over $62 million in rebates to homes and businesses that have installed energy efficient equipment which translates to a savings of more than 586 million kilowatthours per year or 970,000 barrels of oil.

Signed in 2008, the Hawaii Clean Energy Initiative (HCEI) will have a strong impact, given the support of the Governor's office, U.S. Department of Energy, and energy specialists in the Department of Business, Economic Development, and Tourism (DBEDT), creating initiatives to speed the development of Hawaii's renewable energy industry.

Hawaiian Electric's Energy$olutions energy efficiency programs are transferred to the Public Utilities Commission's third-party administrator in 2009. During the 13 years they were administered by the Hawaiian Electric Companies, the programs:

In 2010, the PUC approves a new regulatory model - decoupling - which removes the link between utility revenues and electricity usage and encourages energy efficiency and renewable energy use. A Feed-In Tariff, offering standard rates and contract terms for renewable energy developers, was also approved.