Hawaii's transition to a clean energy future requires a significant investment to ensure a robust electric grid to maintain service quality and reliability while increasing the development and deployment of renewable energy resources affordable to our customers. The ability to attract investors to provide the upfront funding for these projects requires a financially sound utility. The financial strength of the utility is measured through numerous metrics, but two important indicators are: 1) the Return on Common Equity (book and ratemaking); and 2) Credit Ratings issued by the rating agencies of Fitch Ratings ("Fitch"), Moody's Investors Service ("Moody's"), and Standard & Poor's Ratings Services ("S&P").

Shareholders help provide upfront funding for capital improvement projects that serve our customers. The Public Utilities Commission ("PUC") determines a reasonable "return on equity" ("Authorized ROE") or profit for shareholders. Although this profit is what is authorized by the PUC, it does not mean that shareholders are guaranteed this level of profit. In each island region's rate case, the PUC determines the Authorized ROE after reviewing the Company's and interveners' positions regarding the Company's composite cost of capital (which includes the return on equity).

Book ROE is a measure of a company's actual profit or "return" on shareholders' investments. Ratemaking ROE is a measure of a company's profit or "return," based on the PUC's methodology, and adjusted for items not included in rates, on rate base investments funded by shareholders. The primary difference between the book ROE and the Ratemaking ROE is due to items that are not included in rates. For example, incentive compensation and certain other costs are incurred by the Company as part of running its business, but those costs are not paid by customers. Therefore, they are excluded when determining ratemaking profit, resulting in a higher Ratemaking ROE than book ROE. At the end of each year, the Ratemaking ROEs are used to determine whether there will be any sharing of actual earnings that exceed the PUC's Authorized ROEs. Under the current method of calculating rates called Decoupling, each island region's Ratemaking ROE as of December 31 is compared to its Authorized ROE1. For evaluation periods beginning January 1, 2021, a symmetrical Earnings Sharing Mechanism (“ESM”) for achieved ratemaking Return on Average Common Equity (“ROACE”) outside of a 300 basis points dead band above or below the current authorized ROACE of 9.5% for each of the Utilities is used to determine whether an earning sharing adjustment is applicable. There is a 50/50 sharing between customers and Utilities for the achieved ratemaking ROACE falling within 150 basis points outside of the dead band in either direction, and a 90/10 sharing for any further difference. Decoupling went into effect on March 1, 2011, April 9, 2012, and May 4, 2012 for Oahu, Hawaii Island, and Maui County respectively.

The gap between PUC-allowed ROACEs and the ROACEs actually achieved is primarily due to: the consistent exclusion of certain expenses from rates, the lower RBA interest rate (currently a short-term debt rate rather than the actual cost of capital), O&M increases and return on capital additions since the last rate case in excess of indexed escalations, and changes in actual pension regulatory asset and interest expense from the test year level.

1 Refer to the Management Discussion & Analysis section of HECO’s Form 10Q filed quarterly and Form 10K filed annually with the Securities and Exchange Commission for a discussion of drivers behind the gap between authorized and actual ROEs. The Forms can be found at www.hei.com, under SEC filings. 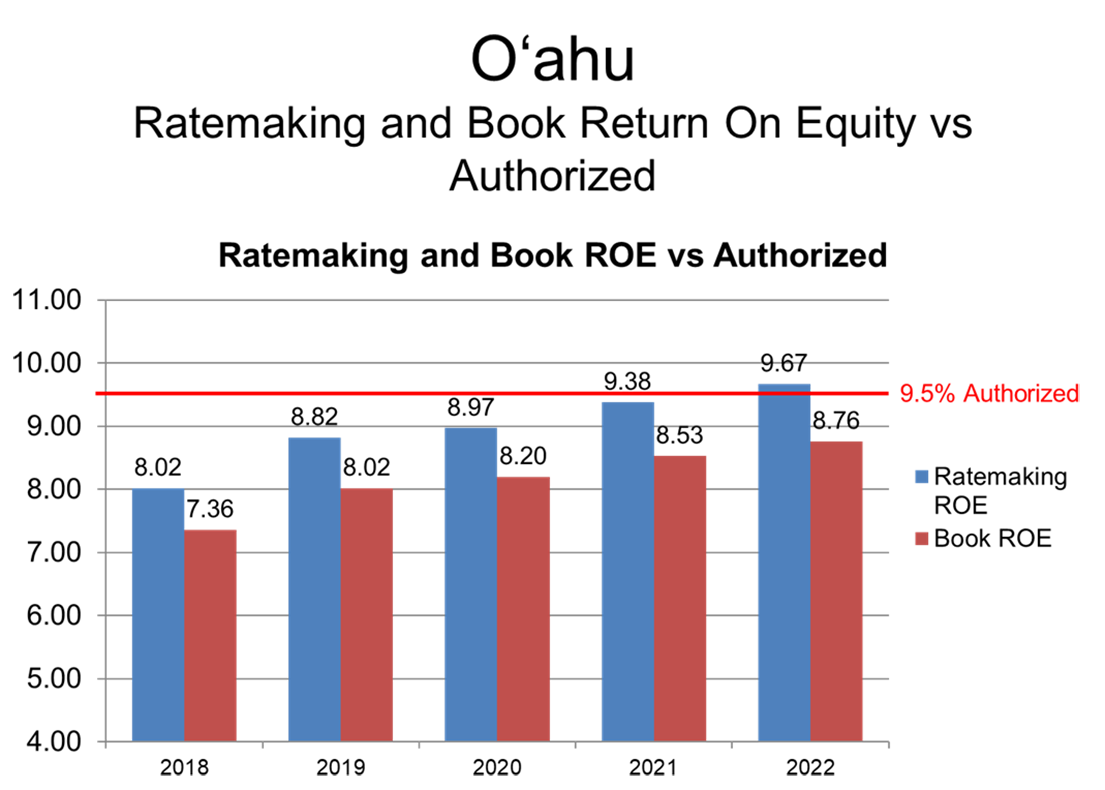 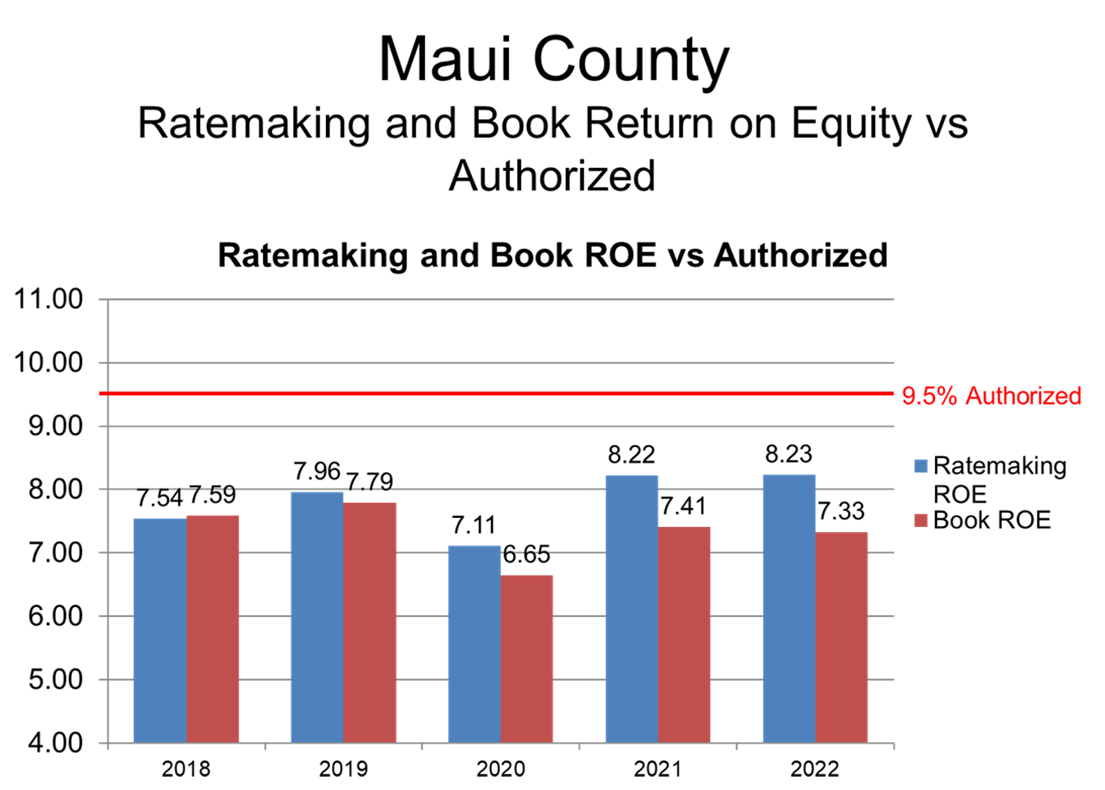 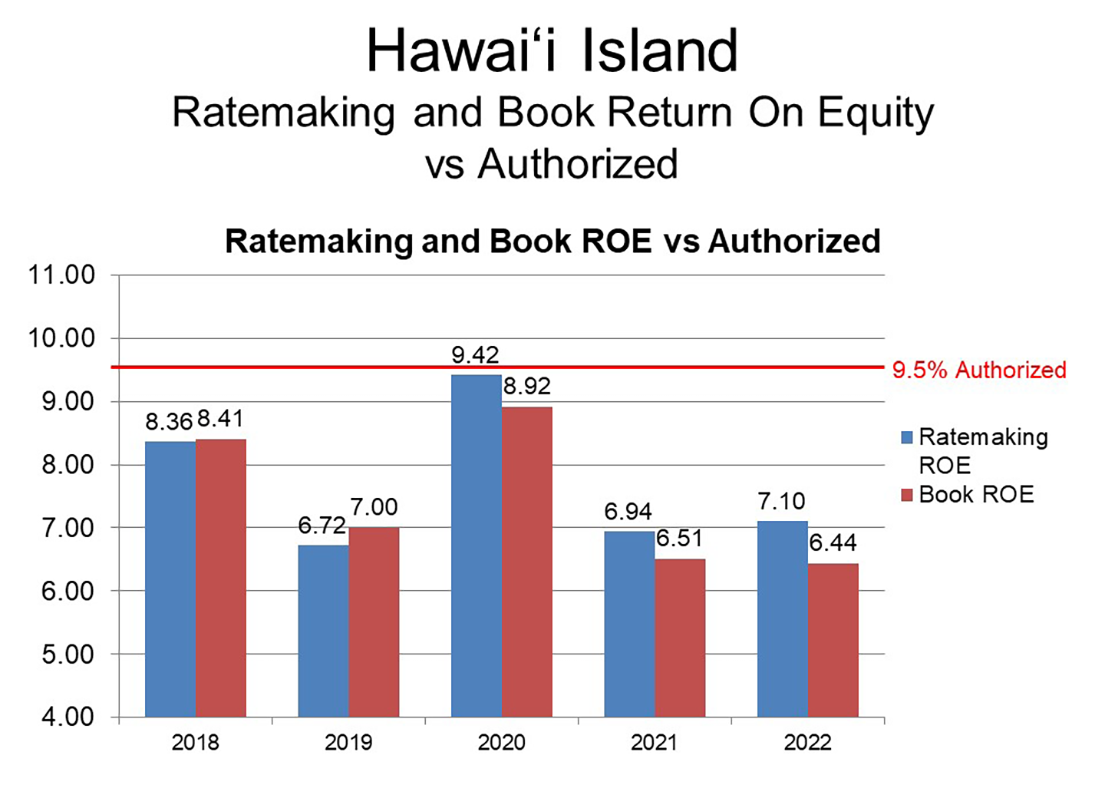 There are three terms that appear often in financial discussions: ratemaking, cost of service regulation, and rate base. Here are some brief explanations of what these terms refer to:

Utility rates charged to consumers are set through a formal regulatory process ("ratemaking" process). The process is typically carried out through a rate case presented by a public utility before the Public Utilities Commission.

In a rate case, the Commission determines the total annual revenues required by the Utility to cover both its expenses and the opportunity to earn a fair return on its investments. The determination is based on the Commission's review of the estimates submitted by the Utility. Expenses are allowed for ratemaking purposes if they are prudent and related to providing safe and reliable service to the customers.

Rate base is the value of facilities and other investments used to provide service to customers, net of funds from non-investors (e.g., customer deposits and accumulated deferred income taxes). Return on the investments is calculated by applying the weighted average rate of return on capital (e.g., long-term debt, preferred stock, and common stock) to the net investment amount, or rate base.

Our relationships with unregulated, energy-related affiliate companies are subject to rules established by the PUC