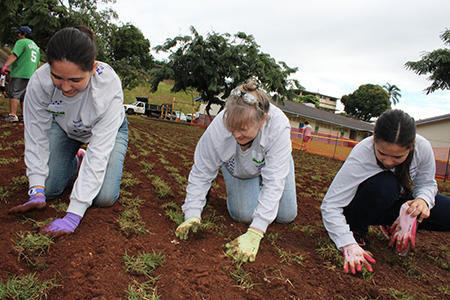 Hawaiian Electric volunteers partnered with the Hawaii 3R’s to transform a parking lot into a playground for students during a community workday at Pearl City Highlands Elementary School in early February.

Pearl City, HI, February 10, 2016 – Under overcast skies with a hint of rain, more than 100 Hawaiian Electric volunteers joined with the Hawaii 3R’s nonprofit to plant grass and create a playground on a former parking lot site at Pearl City Highlands Elementary School on Saturday, Feb. 6, 2016. Hawaiian Electric provided financial support for initial landscaping work and an irrigation system, and organized the workday to transform 5,000 square feet of land into a budding grassy lawn for the children to run and play on.

“At Pearl City Highlands Elementary School, we teach our children about the value of giving back to the community,” said Principal Michael Nakasato, speaking to the volunteers. “The student council is here today and they’ll get to see firsthand what that means. This is a school that at one time was on the verge of being shut down, and we’ve really made an effort working with the staff, parents and community to turn it around. We’ve kept this workday a secret from the parents, and we hope they’ll be surprised and impressed.”

Armed with tools, buckets and determination, the volunteers donned gloves and quickly went to work tearing sod into chunks, digging rows in the dirt, gathering the sod into buckets, and carefully patting sod into the soil. The patchwork pattern assured that the grass tufts could not be dug out by vandals. To help level the sod and ensure good contact between the roots and soil, several water-filled rollers weighing about 250 pounds were rolled across the field under the watchful guidance of the owner and staff of Takenaka Landscaping. The entire field was completed in a little over an hour, and since they had extra sod and time, volunteers also planted grass in several barren spots outside the field that the school had not originally planned to fill.

Rep. Roy Takumi, whose district encompasses Pearl City, Manana and Waipio, turned out with his granddaughter Kayla just as the volunteers were laying the finishing touches. “It’s great that Hawaiian Electric came out here; it shows their commitment to the community,” said Takumi. “People should know that there are a lot of good corporate citizens in the community.”

“The volunteers were so organized and efficient, they got the job done in record time,” smiled Lynn Watanabe of the Hawaii 3R’s, who worked side-by-side in the dirt with the volunteers. “This was definitely a speed record with 100 percent effort by everyone,” added Linda Chu Takayama, Hawaii 3R’s secretary/treasurer. Her husband, Rep. Gregg Takayama (Pearl City, Waimalu and Pacific Palisades), thanked the volunteers “…for making the school a more beautiful place. We’ll be watching the grass and making sure it doesn’t dry out,” he added, saying the strong support of the community and neighborhood has contributed to the school’s popularity.

Hawaii 3R’s is a nonprofit started in 1991 by the late U.S. Senator Daniel Inouye. His vision was to bring the community back to Hawaii public schools through sweat equity and monetary donations. Through this effort, Inouye hoped to address the back log of repair and maintenance requests for schools in need across the state.