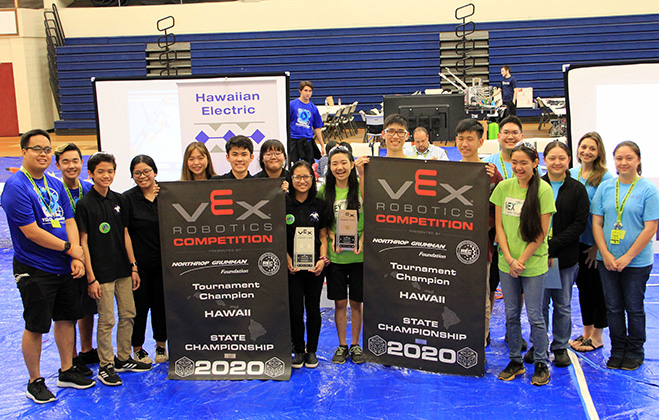 The Excellence Award, the highest award presented in the VEX Robotics Championship, was given to Keaau High School, Cougar Tech Team 5968A in the high school category, and Highlands Intermediate School Team 394A from Pearl City, Oahu, in the middle school category. Both teams exemplified overall excellence in building a high-quality robotics program.

808 Robotics Team 4109A, a home-schooled team from Pearl City, Oahu, and Pearl City High School Team 4142A were named the Tournament Champions. Team 4142A also earned the Design Award, which recognizes a team that demonstrates an organized and professional approach to the design process, project and time management, and team organization.

Team 4142A previously qualified for the VEX Worlds through earning the Excellence Award and Tournament Champions title at the Pan Pacific VEX EDR Championships in November. The team’s overlapping wins provided St. Louis High School Team 42700N and Waialua High School Team 359A with invitations to the world competition based on their skills ranking scores. Molokai Robotics Team 1037B and Waianae Intermediate School Team 27301A also received invitations to the World Championships with their skills scores. This is the first time a team from Waianae has been invited to the VEX Worlds in only the second year the team has competed in VEX competition.

Waialua High & Intermediate School’s Hawaiian Kids Team 359B and Sacred Hearts Academy Lancer Robotics Team 2437A were named the Tournament Finalists at the State VEX Championships and also qualified for the World Championships.

For a full list of award recipients and team results, please visit: https://www.robotevents.com/robot-competitions/vex-robotics-competition/RE-VRC-20-9130.html.

Since 2013, Hawaiian Electric has been the presenting sponsor of the VEX Hawaii State Robotics Championships with support from the Hawaii Space Grant Consortium, Hawaii VEX Organizing Committee, and hundreds of volunteers.