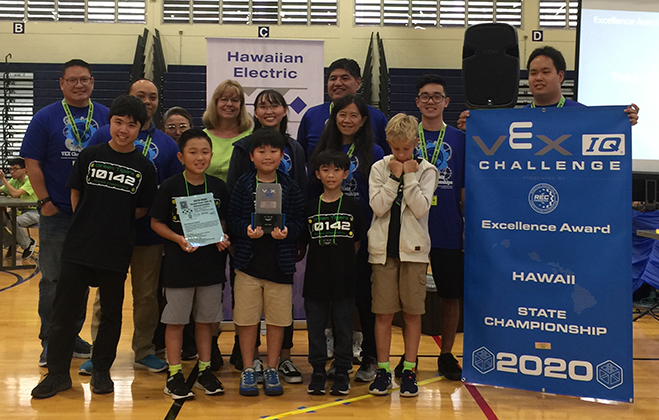 The STEM Research Project Award, a video submission that includes delivering a presentation to a panel of judges, was won by Mililani Mauka Elementary team 241M, which also qualified for the VEX Worlds.

Manoa Elementary team 10142X will also advance to the 2020 VEX Worlds after winning the Excellence Award at the Pan Pacific VEX IQ Championships at Waialua in November.

A total of 39 Hawaii VEX IQ teams from Hawaii Island, Maui, Molokai, and Oahu participated in the state robotics championships, which has been sponsored by Hawaiian Electric since 2013. All VEX programs including elementary, middle school, and high school represent 367 teams statewide.

The 2020 VEX IQ Challenge, called Squared Away, is played on a 4' x 8' rectangular field. The object of the game is to attain as many points possible by scoring balls in or on cubes, and scoring cubes into corner goals or platforms. Two robots compete in the Teamwork Challenge as an alliance in 60-second matches, working collaboratively to score points. Teams also compete in the Robot Skills Challenge where one robot takes the field to score as many points as possible. The matches involve driving skills, which is entirely driver controlled, and programming skills, which is autonomous with limited human interaction.

For a full list of team awards, visit: https://www.robotevents.com/robot-competitions/vex-iq-challenge/RE-VIQC-19-9976.html