Get a quick overview with our EV Brochure

Electric vehicle technology is constantly changing and more manufacturers are releasing different EV models. When considering an EV, you might want to ask how many miles the vehicle can drive on a full charge and what types of charging or fueling options are available. Below is some basic information describing internal combustion engine vehicles, hybrid electric vehicles, plug-in hybrids, and battery electric vehicles. 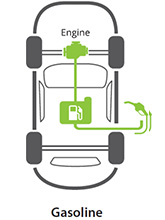 Most vehicles on the road today are still powered by an internal combustion engine fueled by gasoline or diesel. Diesel vehicles, mostly trucks, can use B20 which includes 20 percent biodiesel blended with petroleum diesel or in some cases 100 percent biodiesel. 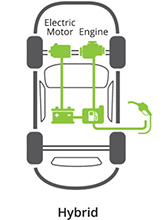 A hybrid electric vehicle has an internal combustion engine and an electric motor; only one of which directly powers the vehicle at one time. The battery is recharged by the ICE and a regenerative braking system. All the energy is provided by gasoline; there is no plug. Popular makes/models include the Toyota Prius, Honda Insight, and Ford Escape. Hawaiian Electric has hybrids in its fleets.

A plug-in hybrid electric vehicle is similar to an HEV but the battery is larger can be recharged from an external source such as an outlet or a charging station. Information about charging a PHEV can be found in our charging basics section below. A plug-in hybrid (also called an Extended Range Electric Vehicle or EREV) operates as an electric vehicle or as a hybrid. When operating as an electric vehicle, power comes exclusively from the battery. As the battery is depleted, the gasoline-powered ICE automatically starts. Regenerative braking still contributes to recharging the battery. Hawaiian Electric has PHEVs in its fleets. 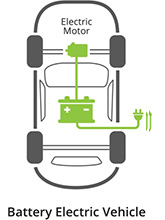 A battery-electric vehicle is powered entirely by electricity stored in its battery. A BEV must be plugged into an external power source to charge the battery. More info about charging a BEV can be found in our charging basics section below.

The typical range of early-model BEVs with a full charge was about 80 miles, but varied with driving conditions and model. In 2017, several models of BEVs will have driving ranges of over 200 miles.

At present, there three different standards of electric vehicle charging are supported by almost all EV manufacturers. While the “charging station” is designed to safely provide power, charging is controlled by the charger in the electric vehicle. 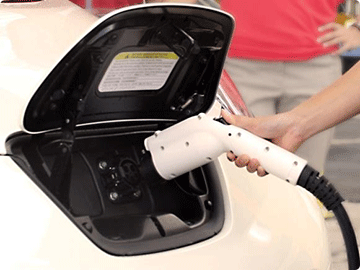 Level 1 generally plugs into a standard 120 volt electric wall outlet, and requires up to 12 amps. A portable Level 1 "cord set" comes with most EVs. One end of the "cord set" plugs into a standard outlet and the other end plugs into the vehicle. The outlet must be a 3-prong, grounded outlet. Many EV drivers charge Level 1 at home. This type of charging can provide about 5 additional miles of EV range for every hour charged. 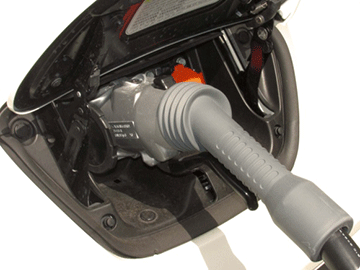 Many BEVs have an inlet for DC fast charging as standard equipment or as an option. The electric vehicle controls the total amount of energy which can be taken in one charge session. A Nissan Leaf can fast charge from empty to 80 percent in about 30 minutes. Cost and electrical requirements make fast chargers suitable only for public settings.

Note: to maintain battery specifications, some EVs will terminate a DC fast charge session before the battery is full.

*Tesla uses a proprietary charging system. Tesla BEVs may use Level 2 or CHAdeMO fast charging stations with a Tesla adaptor.

Some public places have installed Level 2 and DC fast chargers to help support the EV community. Our Charging Locations page lists websites that track the location of public charging stations around the state.