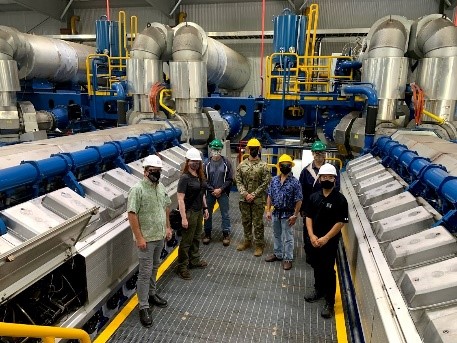 HONOLULU, June 7, 2021 - During a major outage, the Schofield Generating Station will be able to power up a utility-owned microgrid consisting of three U.S. Army installations in Central Oahu. That’s what a joint Hawaiian Electric-Army exercise determined – just in time for hurricane season.

The inaugural test of the Schofield Generating Station’s microgrid capabilities affirmed that if power is lost at Schofield Barracks, Wheeler Army Airfield and Field Station Kunia – all critical lifelines during an emergency – the three installations can be islanded and powered with 100% renewable energy from the Schofield-based power plant. The Hawaiian Electric-U.S. Army effort helps advance energy resilience and security for the Army.

As part of the test, the Army shut off power to Schofield Barracks, Wheeler Army Airfield and Field Station Kunia in the early morning on May 22. In less than an hour, Hawaiian Electric carved a microgrid out of its subtransmission system and restored power to the installations using SGS as the primary source of power, supplemented by the Army’s rooftop PV on the bases. Upon completion of the 36-hour test, the Army again shut down the bases and Hawaiian Electric restored normal grid power.

Although the SGS has been providing valuable service to all Oahu customers since it came online three years ago, the test proved the facility’s additional and unique resilience capability, and not only for the Army. Wheeler Army Airfield is home to Hawaii Army National Guard helicopter units and the Civil Air Patrol, and during emergencies can be used as a Federal Emergency Management Agency air access and staging site. The ability to provide utility-grade microgrid power to these facilities during an emergency could significantly improve disaster response for the entire State of Hawaii.

“This SGS test demonstrates the power of microgrid capabilities to successfully isolate from the main Oahu grid when needed and deliver enhanced energy resilience to benefit the Army.”

“At the core, the success of the Schofield Generating Station project has been the ability for the Army and Hawaiian Electric to work together,” said Keith Yamanaka, energy chief for the U.S. Army Garrison-Hawaii. “This collaboration developed, executed and operationalized energy resilience for the state of Hawaii and the Army. This successful test of the SGS’s capabilities is the culmination of an unprecedented amount of coordination and joint efforts between a utility company and a Garrison.”

Hawaiian Electric’s 50-megawatt Schofield Generating Station came online in 2018 and is on eight acres at Schofield Barracks that the Army is leasing to the company. During normal operations, SGS sends power to the grid daily to benefit all customers.

In return for the value of the 35-year lease for the Schofield Generating Station project, Hawaiian Electric guarantees the Army energy security – ensuring it will be able to restore power to the three installations within two hours if they were to lose power. The lease requires Hawaiian Electric to conduct a one-time “full system test” of this capability to prove it can be accomplished, which was completed in late May.

The exercise was the result of a collaborative effort between Hawaiian Electric, the U.S. Army Garrison-Hawaii, U.S. Army Office of Energy Initiatives, and U.S. Army Corps of Engineers.

SGS is the only power plant on Oahu that is located inland, protected from the potential impact of storms, tsunami and rising sea level. Although capable of operating on biodiesel or diesel, since commissioning it has operated on 100% locally refined biodiesel.