Investing in the Future

On January 17, 2017, Hawaiian Electric, Inc. ("Hawaiian Electric") filed an application in Docket No. 2017-0008 requesting a Public Utilities Commission ("Commission") determination that two 46 kilovolt ("kV") subtransmission lines, as described later in this Application, be constructed above and below the surface of the ground, pursuant to Section 269-27.6(a) of the Hawaii Revised Statutes ("HRS").

The United States Army's ("Army") planned Command and Control Facility project at Fort Shafter requires an expansion of Hawaiian Electric's existing Fort Shafter Substation. For energy security reasons, however, rather than upgrading the existing substation, the Army has requested a new point of service ("Mauka Substation") further within the Fort Shafter base perimeter fence.

The proposed Mauka Substation includes the installation of two 46 kV underground feeders, all of which is located on the Army's Fort Shafter base. Hawaiian Electric proposes to place the feeders underground in ducts that the Army will construct and transfer to Hawaiian Electric in connection with the Project. The Army has requested that the proposed 46 kV lines be installed underground. The project has a total estimated cost of $11.8 million. The Army will pay the project cost, less the cost Hawaiian Electric would have incurred to upgrade the existing substation to accommodate the growth in load.

A copy of Hawaiian Electric's application is available here in PDF format . It is also available for review through the Commission's electronic Document Management System, accessible on-line at the following web address: http://dms.puc.hawaii.gov/dms/. Docket Quick Link 2017-0008. In addition, a copy of the application is available for review at Hawaiian Electric's Regulatory Affairs Office 220 South King Street, Suite 1301.

Public comments may be sent by email to public.comment@hawaiianelectric.com. 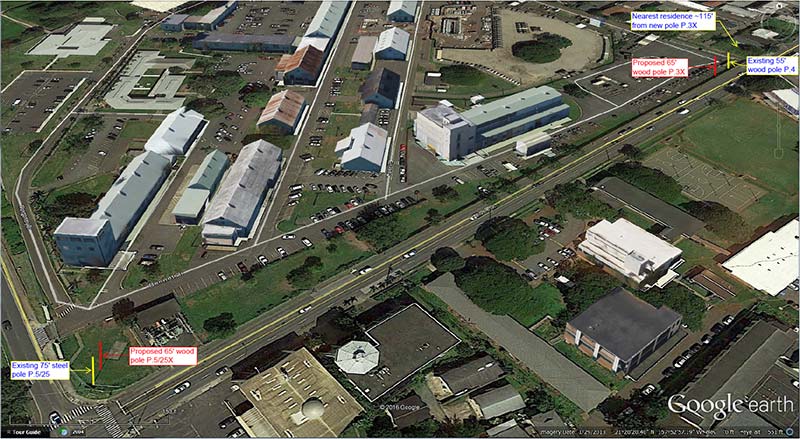