Investing in the Future

The State Department of Land and Natural Resources (DLNR) plans to dredge the Ala Wai Canal for flood control and increased recreational use starting in 2019, pending approval of permits. Hawaiian Electric currently has 46 kilovolt (kV) electrical cables buried under the canal that must be removed for efficient dredging. Hawaiian Electric plans to install new 46kv cables about 40 feet below the canal using horizontal directional drilling. Once new cables are in service, the old cables will be removed.

In addition to clearing the way for dredging, the cables will help maintain reliable service essential for those who live, work and visit Waikiki, a major economic engine for the state. 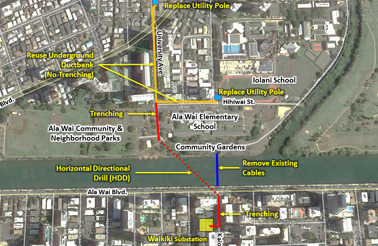 To minimize disruption from conventional trenching in the city streets, Hawaiian Electric will use horizontal directional drilling to install the new cables. As with any major construction, however, some short-term impacts are unavoidable. Hawaiian Electric will make every effort to limit closed traffic lanes, noise and dust.

As part of an environmental assessment, feedback was sought from the community and descendants of families that traditionally lived in the area. Hawaiian Electric has also conducted archaeological and cultural studies required of a project in Waikiki.

An extensive program of outreach is continuing with individuals and communities on both sides of the Canal. They include the McCully/Moiliili Neighborhood Board, Waikiki Neighborhood Board, area elected officials, businesses and residents along the construction route, City Department of Parks and Recreation, Department of Education, Ala Wai Elementary School, Iolani School, and the Waikiki Improvement Association.

Hawaiian Electric first installed cables across the Ala Wai Canal in 1956 to provide Waikiki with additional electric power capacity. As electricity use increased, the original cables were replaced in 1990 with higher capacity cables still in use today. In 2002-03, when the Canal was last dredged, it was determined the cables were at risk of damage from dredging. Hawaiian Electric, DLNR and the dredging contractor developed an interim solution to dredge around the cables. The current cable relocation project will be a permanent solution to not interfere with future dredging operations.

Hawaiian Electric plans to begin work in August 2018 and finish in mid-2019 before the canal is dredged in the area of the cables.

Installing cable across the Ala Wai Canal, 1956 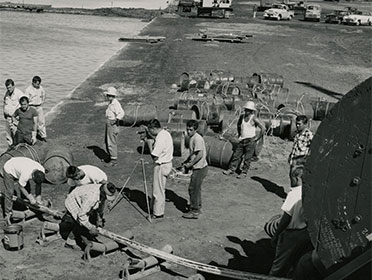 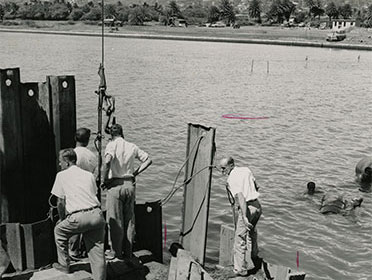 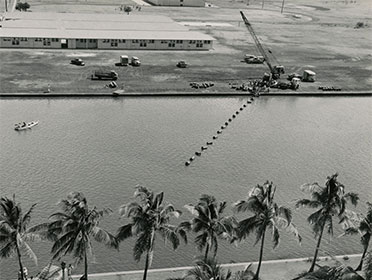 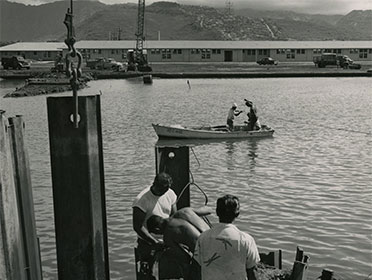 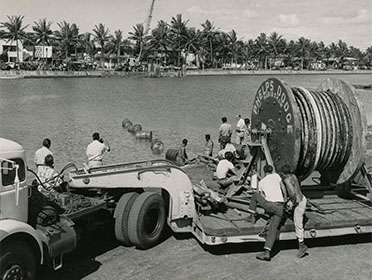 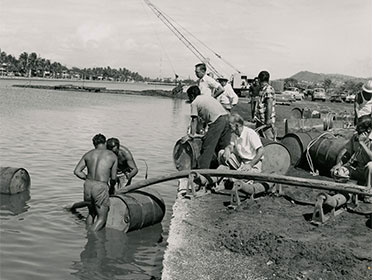