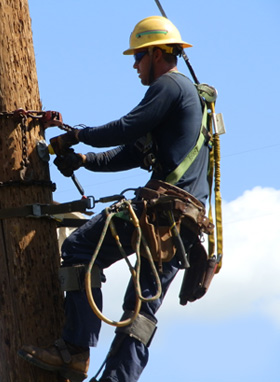 Mililani I Solar – the first of nine clean energy projects slated to come online on Oahu through 2024 – is now feeding lower-cost renewable energy to Hawaiian Electric’s grid. Over time, these projects will help stabilize the cost of energy for customers.

State's 3 largest utilities to be united under one name: Hawaiian Electric

Starting in January, the three utilities that serve 95 percent of Hawaii’s residents will be united under a common name: Hawaiian Electric.

Maui Electric Company will be upgrading utility poles and installing insulated power lines along Lahainaluna Road in West Maui from Thursday, Jan. 2 to Monday, Feb. 10, from 8:30 a.m. to 2 p.m. The work is part of continued efforts to make the island’s electrical grid more resilient while also enabling more private residential rooftop solar to be installed on the island.

Scott Seu, a senior vice president at Hawaiian Electric Company, will succeed Alan Oshima as president and chief executive officer of the company effective in the first quarter of 2020.

Hawaiian Electric named ‘Utility of the Year’ by Utility Dive

Hawaiian Electric Company has been named “Utility of the Year” by Utility Dive, a leading energy industry publication. The 2019 Dive Awards recognize the industry’s top disruptors and innovators, including executives, companies, trends and breakthroughs transforming the industry.

When the Kaimuki Christmas Parade ends this evening, it will culminate with the lighting of the floating Christmas tree at Puu o Kaimuki Mini Park – a tradition brought back, in part, thanks to Hawaiian Electric volunteers from IBEW Local 1260.

Maui Electric Company is starting the largest procurement for renewable energy resources on Molokai and Lanai in efforts to reduce the reliance on imported oil for power generation and move the state closer to its goal of 100 percent renewable energy by 2045.

The holidays are right around the corner, and Hawaii utilities are bracing for a spike in scam calls and phishing from thieves and scam artists posing as utility workers and bill collectors.

The Hawaii Public Utilities Commission (PUC) has issued an interim decision that results in no increase in electric rates at this time for Hawaii Electric Light Company customers.

To more effectively serve customers with rooftop solar and other devices that can interact with the electric grid, the Hawaiian Electric Companies are creating a single Customer Energy Resources (CER) department with personnel based on Hawaii, Maui and Oahu.