HONOLULU, Jan. 18, 2018 - More than 100 megawatts of solar were installed across the Hawaiian Electric Companies' service territories in 2017, a 19 percent jump from the previous year, helping to move the state closer to a clean energy future.

At the end of 2017, Hawaiian Electric, Maui Electric and Hawaii Electric Light recorded 695 megawatts (MW) of cumulative installed solar, up 109 MW from 2016. The megawatts of solar added last year produce power equivalent to that used by about 32,000 homes.

The solar total includes 82,000 private rooftop solar systems connected or approved, up 3.6 percent from 2016. It also includes the addition of the 27.6-MW Waianae solar facility, which provides some of the state's lowest priced renewable energy.

"We ended 2017 with the largest year-to-year increase of installed solar since 2013 and we anticipate even higher numbers by the end of this year," said Jim Alberts, Hawaiian Electric senior vice president of customer service. "We're excited about new solar programs on the horizon such as Smart Export and CGS+, community-based renewable energy and new grid-scale projects underway on Oahu and Maui. And we continue to improve and streamline the rooftop solar application process for our customers."

Since the launch of the online Customer Interconnection Tool last fall, customers have been able to submit online applications to install private rooftop solar under the Customer Self-Supply program. The online application tool is believed to be the first of its kind to provide a seamless process allowing customers to follow the status of their applications from start to finish.

The companies anticipate continued growth in private rooftop solar and utility-scale projects. On Oahu and Maui, 135 MW produced by six separate projects will come online this year, including Hawaiian Electric's 20-MW solar facility at Joint Base Pearl Harbor-Hickam. That project will produce the lowest-priced grid-scale solar in the state for the benefit of all Hawaiian Electric customers. 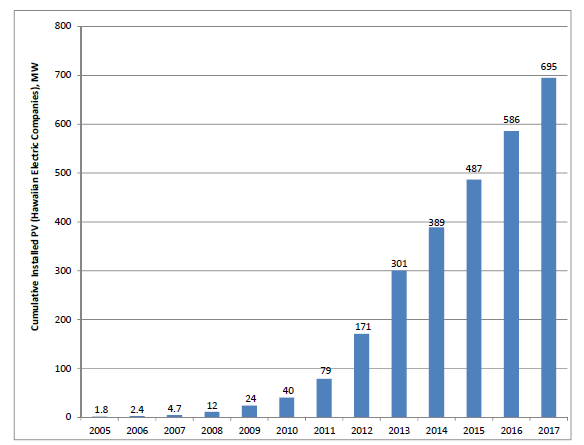